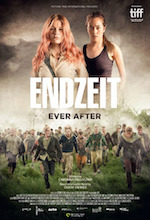 Endzeit - Ever After's philosophical underpinnings go much deeper than the expected "humanity is the real monster" banality that these films too often mistake for a unique or profound thought.

Featuring a striking cameo from Danish actor Trine Dyrholm (Love is All You Need, Nico, 1988), ENDZEIT suggests there are things worse than civilization’s collapse. Vivi takes consolation in the stars, which shine more brightly than they had before the disaster. It’s the end of the world as we know it — and she feels fine.

Stunning set design tells poignant stories as the women visit homes where none of the living remain.

by Jennie Kermode Eye For Film

A fresh, beautifully filmed take on the zombie genre from director Hellsgård, adapted from the comic by Olivia Vieweg (who also wrote the script), with women in every key role, both in front of and behind the camera.

ENDZEIT explores heavy themes such as mental illness, regret, family problems, climate change, fascist regimes and more, all under the guise of a “zombie movie”, while having some of the most beautiful imagery that’s coincided with the rise of the living dead, thanks to cinematographer Leah Striker (Silent Summer, Krieg).